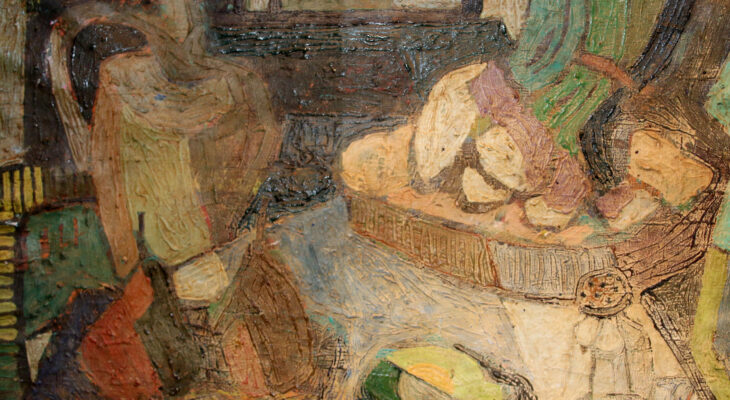 The collection of paintings in our Museum was enriched with another painting by Hanna Gordziałkowska-Weynerowska (Kali) donated by Kali’s niece, Lola Hoover from Maryland (USA). We would like to thank Mr. Markus Blechner, Honorary Consul of the Republic of Poland in Switzerland, for his help in delivering the painting to Switzerland.

What was the artistic and life path of Kali, one of the most talented Polish painters living in exile? September 1939 shattered Kali’s youthful career dreams. That beautiful summer she was finishing her studies at the Academy of Fine Arts in Warsaw in Pruszkowski’s class. She swapped the brush for a rifle. She became a member of the underground armed forces and took the name of the Indian goddess of vengeance – Kali. All her paintings will be signed with this pseudonym. After graduating from a secret military school, she obtained the rank of lieutenant and was assigned to a sabotage unit (blew up bridges, viaducts, tunnels).

For her courage, she was awarded the Uprising Cross. Wounded in the Warsaw Uprising, she was taken away and sent to a camp in Germany. She made a successful attempt to escape to the American zone, and in the fall of 1945 she left for Belgium. Here she graduated from the Royal Academy of Fine Arts in Brussels. There she met and married Henryk Weynerowski, son of a shoe manufacturer in Bydgoszcz. They both decided to go to Canada. The time in Canada was a good period in her painting career. Her canvases received awards and praise reviews. Her works were selected to represent Canada at the Modern Art Exhibition in Sao Paulo, Brazil and Caracas, Venezuela. 1953 brought a change of residence – San Francisco, California. She lived there until the end of her life. She donated her entire artistic heritage to the Polish Museum in Rapperswil (86 canvases). However, the paintings did not find their destination immediately. After several years of searching, and with the help of the FBI, we managed to locate the place where the paintings were stored – in the villa of the executor of her will, and her nephew at the same time.

On the website www.artsandculture.google.com you can view selected paintings of Kali and admire their beauty.

Concert in Museum – May 29th, 2022 The Polish Museum stays in Rapperswil!
Search
Categories
The latest news