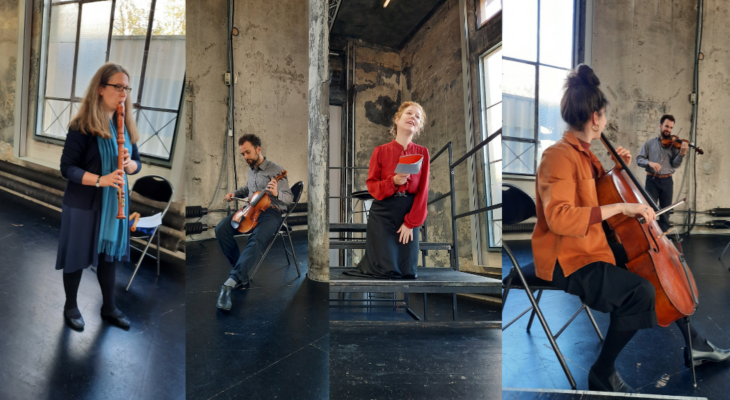 The sound performance “I’m not alone” is inspired by the history and heritage of the ancient Balkan Via Egnatia route, over 2,000 years old. As part of this concert, which took place on November 22nd, 2020 between 14.00-17.00 at the Polish Museum in Rapperswil, seven musicians presented their improvisations. They consist of works woven from stories telling about the links between Switzerland, Eastern Europe and the Western Balkans.

The performance, which will be shown in 15 different museums in Switzerland, was based on the one hand on the interviews that took place with the local people as part of a research trip, and on the other hand on the linguistic material of Swiss writers. At the Polish Museum, the sound performance extended over several floors of the clock tower and reminded you of the turbulent history of this institution, which was established 150 years ago.

The artist Sarah Elena Müller presented as the chronicler of this event, documenting the performance in a literary manner.

Information: Presence at the show was possible at any time, also the length of stay was unlimited.

In antiquity, Via Egnatia was one of the most important trade and communication routes. It led from Durrës (Albania) through North Macedonia and Greece to Constantinople, connecting Western Europe with the Southeast, and the West with the East. It was traveled by merchants and wanderers of all kinds, emperors, apostles, viziers and crusaders, it was the way of the expansion of Christianity, and then Islam. To this day, various migratory movements take place on this route – for various reasons and in both directions. People, objects, cultural traditions, hopes and ideas are still in motion and continue to make up the history of Via Egnatia.

The project “I’m not alone” will be carried out by the end of 2021 as a sound performance in 15 museums all over Switzerland, and later shown at music and theater festivals. The performance was created on the basis of interviews that were made during a research trip to the Balkans. There were numerous discussions with the local population about their life situation, their relationship with the ancient Via Egnatia and their perception of Europe. This material served as a starting point for the creation of a performance that is presented to the audience in the form of an acoustic image composed of sounds, noises and voices. The project is being carried out by a seven-person performance team specializing in contemporary music and improvisation.

Exhibition of paintings by Marta Kołodziej in Meiringen