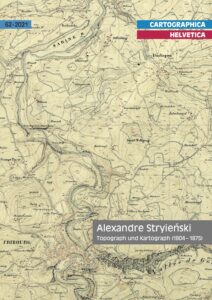 At the beginning of the 19th century, topographic maps of the Canton of Fribourg – like for most of the other cantons – were rather inaccurate. Topographic surveys based on a uniform triangulation, as was the case in France, had not been realized yet, due mainly to the federalist system in Switzerland.

Among the best representations at the time are two maps covering the territory of Switzerland which showed the Canton of Fribourg at a medium scale: the Atlas Suisse at approx. 1:120,000, published 1796–1802 by Johann Rudolf Meyer, Johann Heinrich Weiss and Joachim Eugen Müller, as well as the Karte der Schweiz at 1:200,000, published 1835/36 by Joseph Edmund Woerl.

However, these maps were too inaccurate and not detailed enough, neither for military purposes, nor for road construction or for use in schools. The government of the Canton of Fribourg was pleased to learn that Guillaume-Henri Dufour, who was elected Quartermaster General in 1832, decided to carry out a national trigonometric survey, the so-called Triangulation primordiale. The cantons were commissioned to carry out topographic surveys of their territories on the basis of this official survey. The government of the Canton of Fribourg took Alexandre Stryieński under contract for this task. He had previously worked with Dufour on preparatory work for the Topographische Karte der Schweiz 1:100,000 («Dufour Map»).

Casimir Napoléon Alexandre Stryieński was born on September 11th, 1804 in Białystok, Poland. He attended the military cadet school in Warsaw and was trained in fortress construction. From 1828 to 1830 he completed his military service, served in the Russian general staff and was promoted to captain. After the failed Polish insurrection against Russia, he was sentenced to death in absentia and fled to Besançon in France. In 1833, he settled in the Bernese Jura where he prepared forest maps for the «Commissions bernoise des forêts». In 1839, he married Maria Anna Pauline de Lestoq in Porrentruy. They soon moved to Geneva. The couple had eight children.

During 1838 to1842, Stryieński was sent to the Canton of Valais by Dufour and was charged with establishing a topographic survey for sheet XVII of the Dufour Map. From 1844 to 1851, and beginning in 1846 with the assistance of René Henri L’Hardy, he surveyed the entire area of the Canton of Fribourg at 1:25,000 for the Dufour Map sheets XI and XII. Based on this data, he drew the drafts for the school wall map of the Canton of Fribourg at 1:100,000 (published in 1851) and the Carte topographique du Canton de Fribourg in four sheets at 1:50,000 (1855). He also created a draft for a school hand map at 1:250,000 (1852) and published another schoolmap at 1:315,000 in 1859. In 1852 the State Council commissioned him to investigate different track variations for the planned railroad construction in the Canton of Fribourg, published at the beginning of 1853. His Carte scolaire du canton de Genève, a school map of the Canton of Geneva at 1:100,000 as well as his Carte du Duché de Savoie at 1:500,000 were printed in 1854. In 1854/55, he was confronted anew with topographic surveys, this time for sheet VIII, and the same data were also used for the map of the Canton of Lucerne at 1:25,000. Some of the survey sheets from the cantons of Fribourg and Lucerne were subsequently used directly or partly revised as the basis for the Siegfried Map at 1:25,000. Through negotiations by Dufour, Stryieński was elected as «Engineer of public works» in the administration of the Canton of Geneva in 1858.

Due to illness, Alexandre Stryieński retired in October 1875 and moved together with his wife to Paris, where their oldest daughter Léocadie lived. There he passed away on December 9th, 1875.